Whether it’s for engraving or lathing, your machine will soon need to replace its CNC spindle motor.

When choosing a new motor, there are many options to choose from that can make it overwhelming to know which one can keep your machine functional for many years to come. And no motor will function alike.

We have a list of the best CNC spindle motors you can choose from. We will review these products based on their functionality, their features, and their setbacks. After going through all of them, we will determine who has the best spindle motor. The winner will be chosen by who has the most positive features. 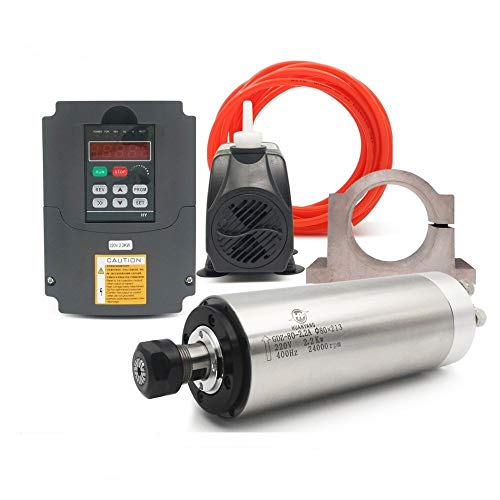 Hy Huanyang offers their VFD CNC Spindle Motor Kit that includes a 220-volt to 2.2-kilowatt spindle motor with four 13cm 400Hz bearings built-in with an electrical resistance of 20. Alongside an 80mm motor clamp mount, a 220-volt to 75-watt water pump, and a 5-meter water pipe.

The spindle is measured around 213mm wide and 130 mm tall and can be held with a motor clamp. The variable-frequency device stands at 168 mm tall, 161mm wide, and 124 mm long. And the water pump is 105 mm tall. These are the perfect sizes to fit in a workshop with lathing and engraving machinery and a garage for DIY projects.

The VFD can have a computer numerical controlled phase converter generating a single line of power into three. This is to help alternate the electrical currents with motor machines that operate constant and variable torque control and the motor itself to prevent electrical overload. It can also work with a Mach 3 controller due to using sine waves.

The spindle motor runs at a speed of 24,000 RPM, meaning it can cause the surface it’s on to vibrate. Thanks to the clamp, it holds it in place while running. And the shell is made of aluminum to protect its red copper wiring from water and allows the water pump to cool it safely.

As a bonus, the kit carries a one-year warranty in case your shipment is damaged. Or you accidentally caused damage during the kit’s usage in the first year. 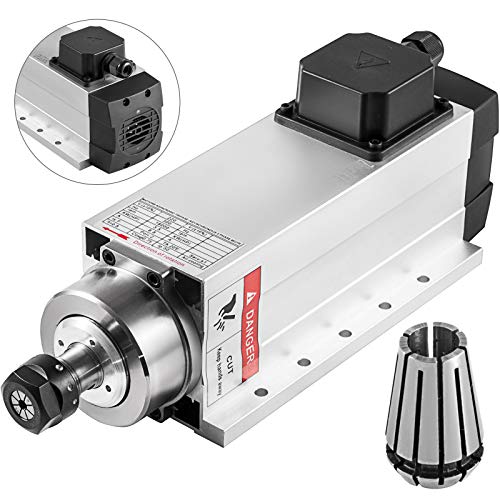 Morphorn provides buyers a square spindle motor that can handle up to 4 kilowatts.  Inside of it, it has 6mm collets that have an electrical resistance of 20. While it’s called a square, it’s actually rectangular with its size at 5 inches tall, 4.5 inches long, and 13 inches wide.

This spindle has a durable, strong exterior made of manganese steel. The material helps reduce noises coming from the machine it’s operating in and makes it hard to cause a dent that even knives can’t penetrate through it. The bearings are also made of the same steel to resist rusting during usage. To prevent it from overheating, Mophorn used a scientific-designed fan built-in computer numerical control behind the motor.

It is impressive that the spindle motor can run without an additional VFD, and it doesn’t need to be connected to cooling equipment to keep it running. But for the price, it can be expensive to replace a whole motor. With a pre-bought kit, you can replace parts separately for cheap over time. 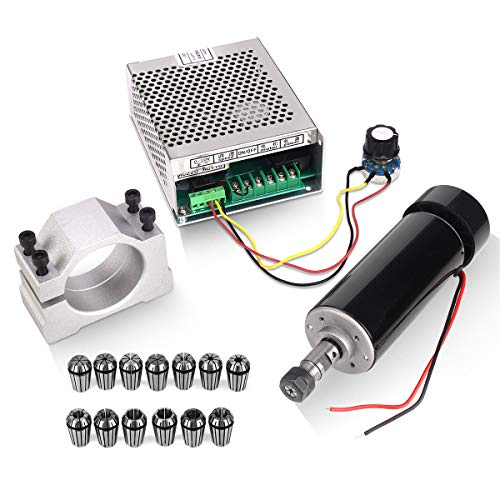 Inside the MySweety CNC Spindle Kit, it has a 500-watt to 0.5 -kilowatt spindle motor, a 110V-220V Mach 3-speed power converter, a 52mm motor mount bracket with 4 screws, a 13-set of collets with an electrical resistance of 11, and a 10-set of V-bit cutters. The spindle size is 200mm long, and the speed power converter is 5.5 inches wide, 4.3 inches long, and 2 inches tall, about the same size as a DVD compact drive.

MySweety’s power converter has a unique construction in its design. A switch is powered by alternate currents in the input and direct currents in the output. The motor itself has a built-in spindle run out on the back, allowing itself to transmit force without conducting or insulation. It’s adjustable to different collet sizes from 1mm to 7mm to work in a wide variety of lathing and engraving machines.

The kit also comes with a clamp mount for the motor’s high speed. It can run up to 12,000 RPM and causes the surface to vibrate violently. With the clamp, it’s able to reduce vibrations and noises.

The power converter does have its setbacks. Unlike the motor, it needs to run in a cold area in your workshop or garage to keep it cool. Other additional requirements include staying away from other metals that can conduct electricity, can’t apply to surfaces that can cause vibration, and needs to be away from flammable items. 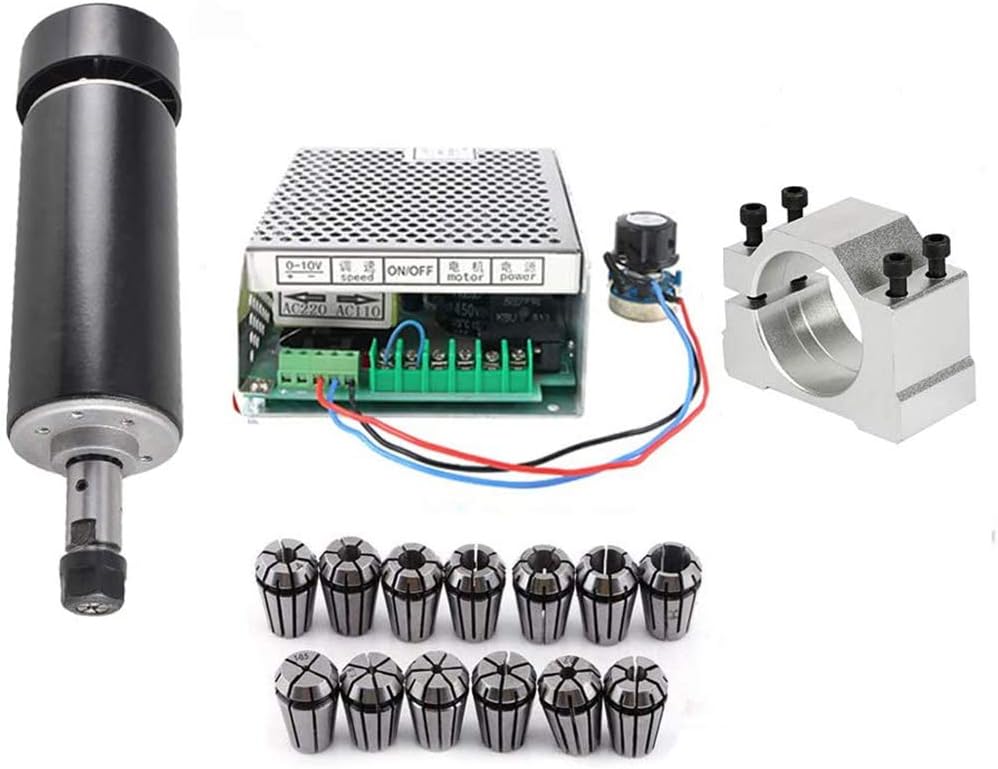 Konmison offers their Air-Cooled Spindle Motor Kit which offers a similar spindle motor set to MySweety. It has a 500-watt to 0.5 -kilowatt spindle motor, a 110V-220V Mach 3-speed power converter, a 52mm motor mount bracket with 4 screws, a 13-set of collets with an electrical resistance of 11, and a 10-set of V-bit cutters.

There isn’t much to address about the product as they share the same setbacks and features. The only difference between Konmison and MySweety is their retail prices. The MySweety’s kit is less expensive than Konmison’s kit. 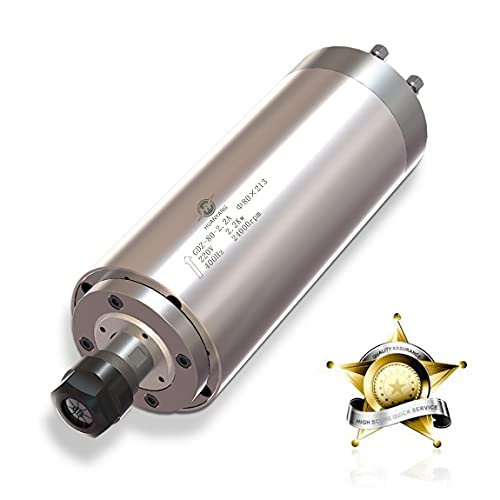 Hy Huanyang also offers their water-cooled CNC Spindle Motor. As mentioned before, it’s a 220-volt to 2.2-kilowatt spindle motor that has four built-in bearings. While this is not a kit, it won’t operate without a VFD and a water pump to keep it cool.

If you plan to buy a VFD after the motor purchase, be sure to check the voltage is above 110 volts. If you do have the Hy Huanyang VFD CNC Spindle Motor Kit, buying this motor on its own is useful when it’s time to replace the motor.

Now that we review all of the top 5 spindle motors on the market, it’s time to pick the best one out of the bunch. The motor that will take the number one spot is Hy Huanyang’s VFD CNC Spindle Motor Kit. While the other four spindle motors have good qualities, there are four reasons why Hy Huanyang’s kit took the top spot.